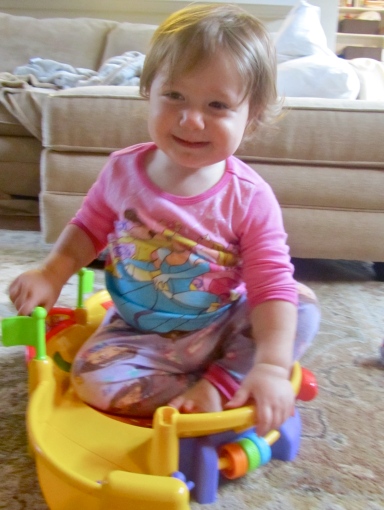 A few weeks ago, one of my playgroup friends told me that I should write a sitcom about my life.  For some reason, the idea really stuck with me.  However, there is one problem that I can’t get past…all the episodes would be about poop.

Having two babies in diapers, one with GI issues requiring her to imbibe a Mirilax cocktail twice a day, has forced me to become intimately acquainted with doodoo.  Poop on the floor? Yawn. Poop on my clothing? Child’s play.  A cellphone dropped in a dirty diaper? Been there, done that!

But even a veteran waste management pro like myself can be thrown for a loop from time to time.

Case in point.  A few mornings ago, I was attempting to shower and get dressed while the babies were taking a morning snooze.  Of course, Baby Girl (otherwise  known as Miss Toots around these parts) decided that a morning siesta was not on her agenda, so she ended up joining me in the bathroom as my fashion consultant.  She quickly bored with that job (apparently I am beyond help) and began playing with a super-cool toy from our bathroom stash. To fully grasp the rest of the tale, you need to be able to visualize this toy.  It is a race track designed for toddlers to play with, specifically the Fisher Price Spinnin’ Sounds Speedway.  It is basically a large orange bowl that spins around while making a rather irritating shrieking sound, slinging cars around the room with abandon.  Big fun.  Recently, the twins have grown adventurous, testing the limits of the speedway by throwing any object they can find into the spinning vortex.  Balls, shoes, hairbrushes, sippy cups, you name it.  On this fateful morning, Miss Toots decided to place herself in the bowl to see what would happen.  Turns out the thing is just the right size for a cute little toddler tushie.  She amused herself for a good while climbing in and out of the bowl and talking to herself, which tickled me to death because I could actually brush my teeth and clothe myself in relative peace.

But I got greedy.

Just as I was about to blow dry my hair, which is a luxury reserved for special occasions only, I noticed an unpleasant odor permeating the air.  Sure enough, when I investigated the situation, Miss Toots had a “poopoo tail,”  the affectionate and very mature term we have adopted for situations when you can look down the back of a baby’s diaper and see the beast within threatening to escape.  I should have stopped there and been thankful for the fact that she had allowed me to shave my legs and put on a little makeup.  Instead, I thought, “I’ll just dry my bangs a little bit and then we’ll call it good.”  Mistake of epic proportions. As I was drying my hair, humming a little tune and looking forward to a fun morning at the park with the kids, Miss Toots decided it would be fun to turn on the speedway while she was sitting in it.  It must have been a funny sensation to be sitting in the rotating bowl, because I could hear her raucous laughter over the hair dryer.  However, while it was thrilling to the baby, it was not so kind to her pants.  Since she did not rotate with the bowl, but rather sat still while it turned underneath her, the friction of the spinning plastic against her diaper squeezed most of what was inside it…out.   And once it was out, it was a disaster.  Remember those “Spin Art” paint machines that were so fun to play with as kids?  Yep. I’ll say no more.  And as if that weren’t enough, just as I turned off my hair dryer she decided to hop out of the race track and make a beeline for the bathroom doors.  To make matters even worse, I was in the middle of a massive closet-purging project so there were piles of clothing all over the floor that she decided to plow through for effect.

I will not describe the carnage that she left in her wake. Your imagination will do just fine.  All I will say is that the little sticker people in the “stands” of the speed way were either hiding their faces in shame or weeping at the horror of it all.  Oh, the humanity.

But every cloud has a silver lining.  Even with the unexpected cleanup job (which was no laughing matter) thrown into our morning schedule, we still made it to the park on time to meet our friends. How’s that for Supermom. 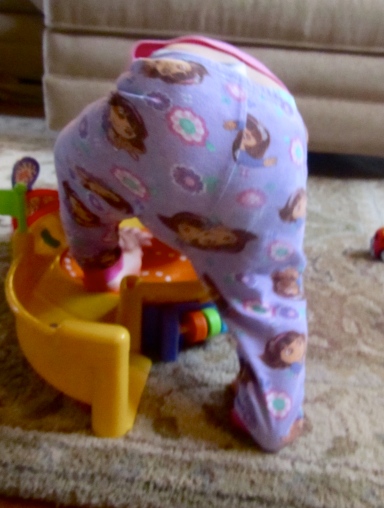 Welcome to my little corner of cyberspace! I'm Stephanie, a speech-language pathologist turned stay at home mom of one-year-old boy/girl twins. Join me as I blog about parenting twins, early childhood activities, and living a creative life.

Does Anyone Even Read This?